According to news reports it was a beautiful spring afternoon in southern Ontario the day Cameron March went missing. Children were enjoying the sunshine playing in a neighbour’s yard.  Four-year-old Cameron played on a swing set with his young friends. His mother, Barbara, had mentioned to reporters that she looked out from her kitchen window. She must have been so happy to see her beautiful blonde-haired boy having so much fun playing with his friends. Their home on Blind Line in North Burlington was a modest sized bungalow surrounded by fields, trees, local farms and water filled ditches. Neighbouring homes were sparsely separated along this quiet rural road which was just north of a local stone quarry.

You could imagine Cameron’s white shirt glistening in the sun. The climbing monkeys on the front his shirt bouncing as he played in the yard. His rust brown corduroy pants disguising the dirt as he rolled around on the ground. When he ran, navy-blue socks would likely have flashed above his brown desert boots, matching the colour of his wide young eyes. 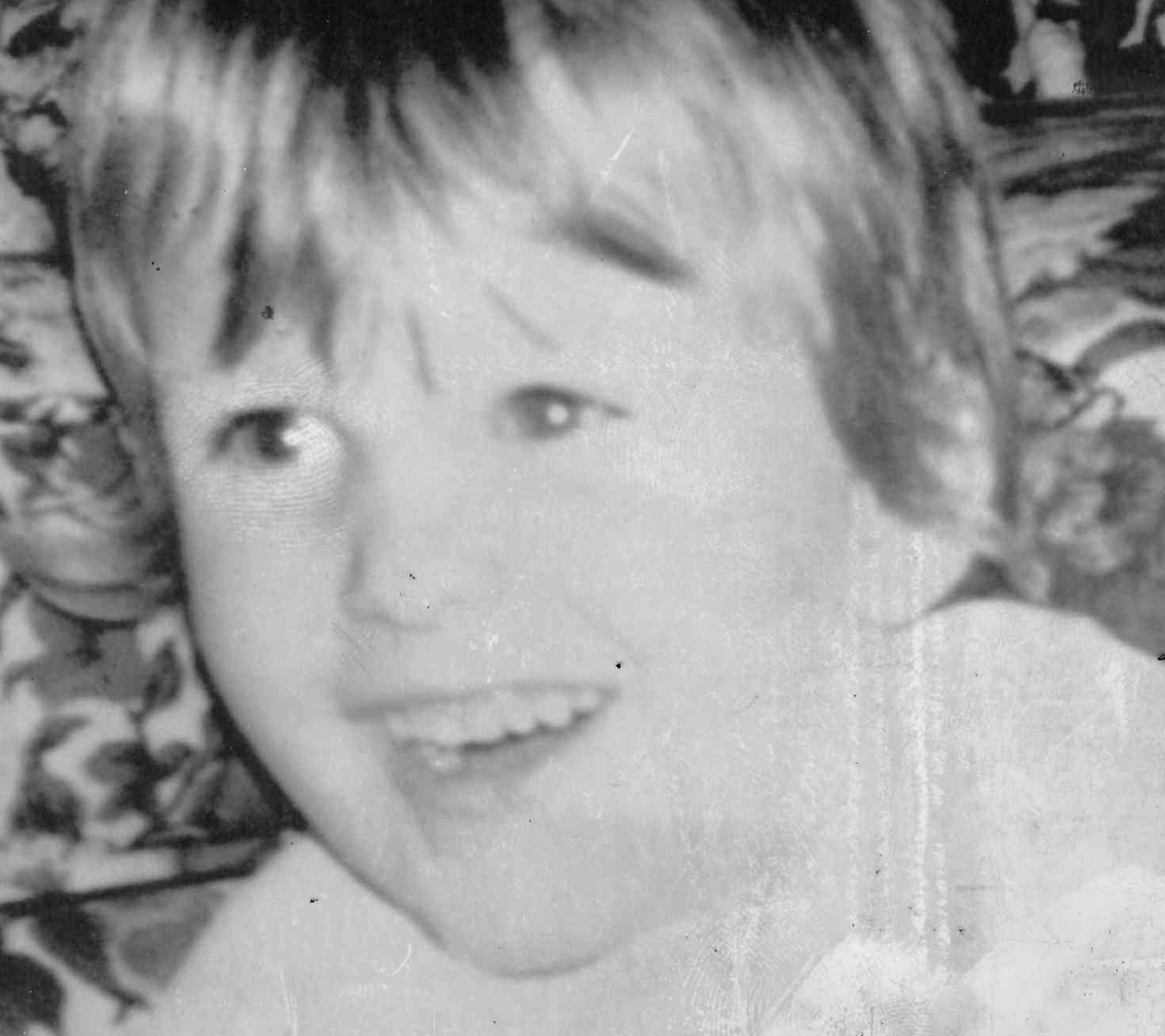 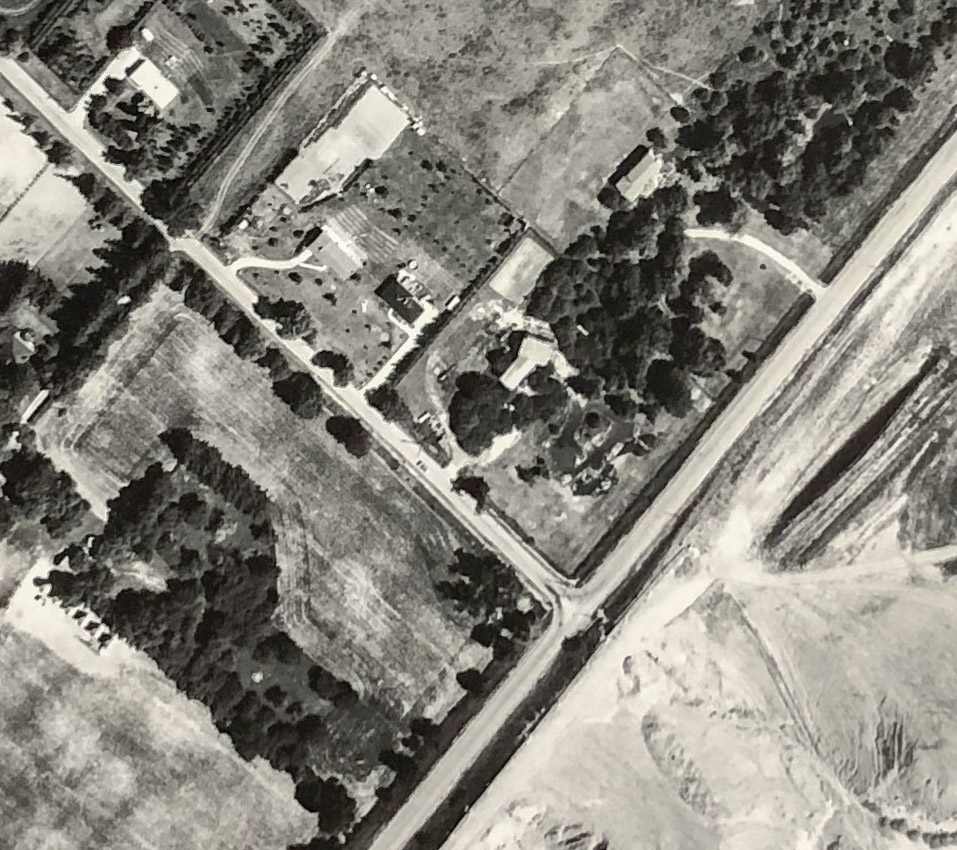 The day was Wednesday May 7, 1975. It was a day that would change the lives of Barbara March and her husband Gerry forever.

Barbara had been keeping a regular watch on her son from her home, but after a while she checked again and couldn’t see Cameron play amongst the other children. She had told reporters that at first, she didn’t pay it much attention. She just thought the kids were all playing a game in the garden. Perhaps he was just hiding.

She looked again from her window and that’s when she realised her son was not playing with the other kids. Any parent can imagine how she must have felt; her stomach must have turned. The 29-year-old mother said she instinctively knew something had happened to her son. She was frantic and hysterical. She called on of her neighbours and desperately searched the area to look for her little boy. She even dived into a pond in a garden next to her home just in case he had fallen in. She was terrified. The fear must have grown with each passing moment.

At the time of Cameron’s disappearance, his dad, Gerry, been setting up a show at the CNE grounds in Toronto. Since there were no cellphones in 1975, it wasn’t until he returned to his office in Mississauga when he discovered the news that his son had gone missing. He immediately drove straight back home to Burlington.  By the time he had returned home, the police had already been called in to search for the boy. Dozens of people in the local community swarmed the area to look for him over rough terrain all throughout the night.

Supt. George Moore of the Halton regional police force was in charge of the search operation. By the following morning 125 people showed up to search. Police and volunteers joined the search alongside Cameron’s frantic parents and a command post was set up in the March’s yard. 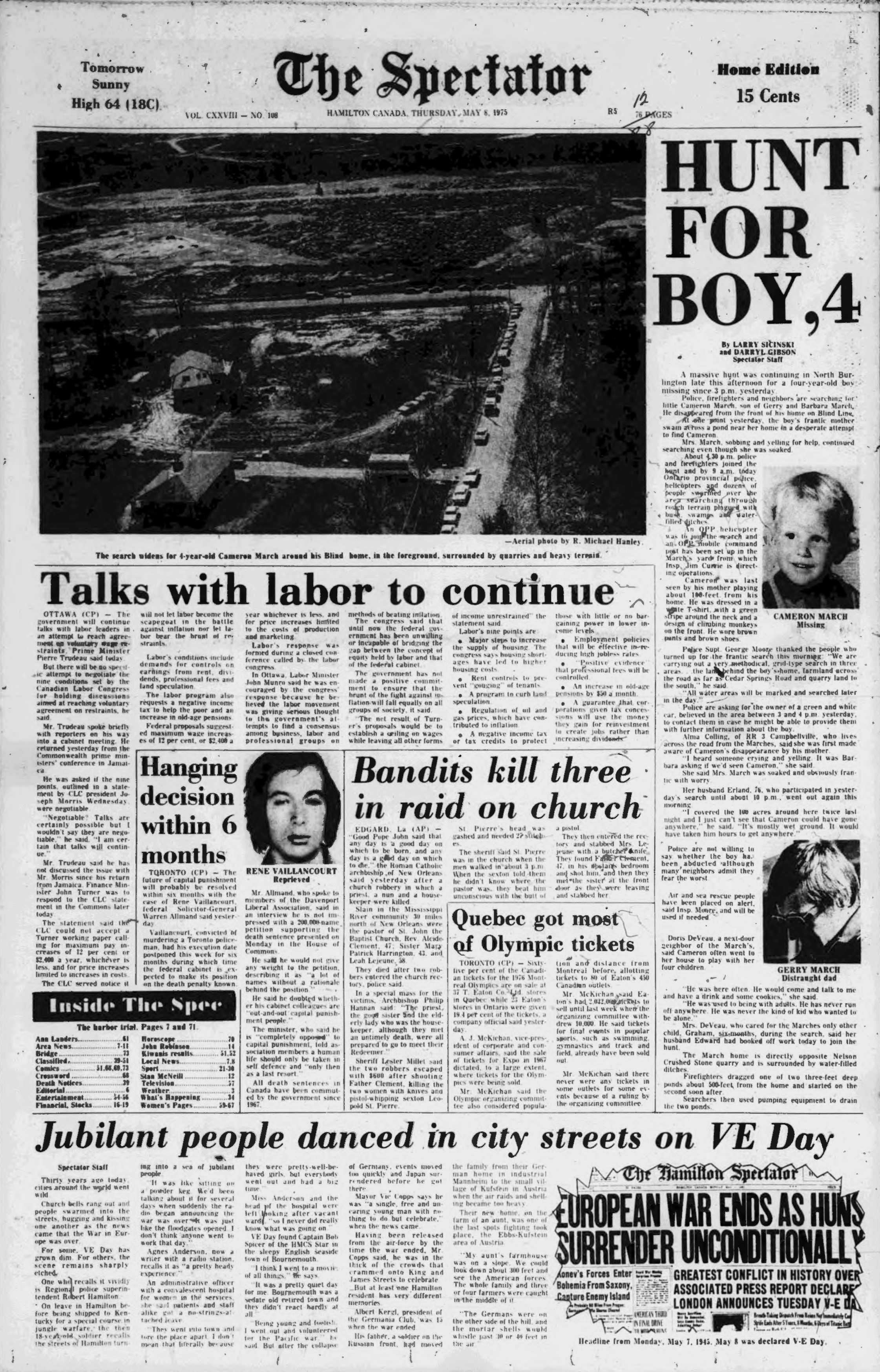 © The Hamilton Spectator. Used with permission. 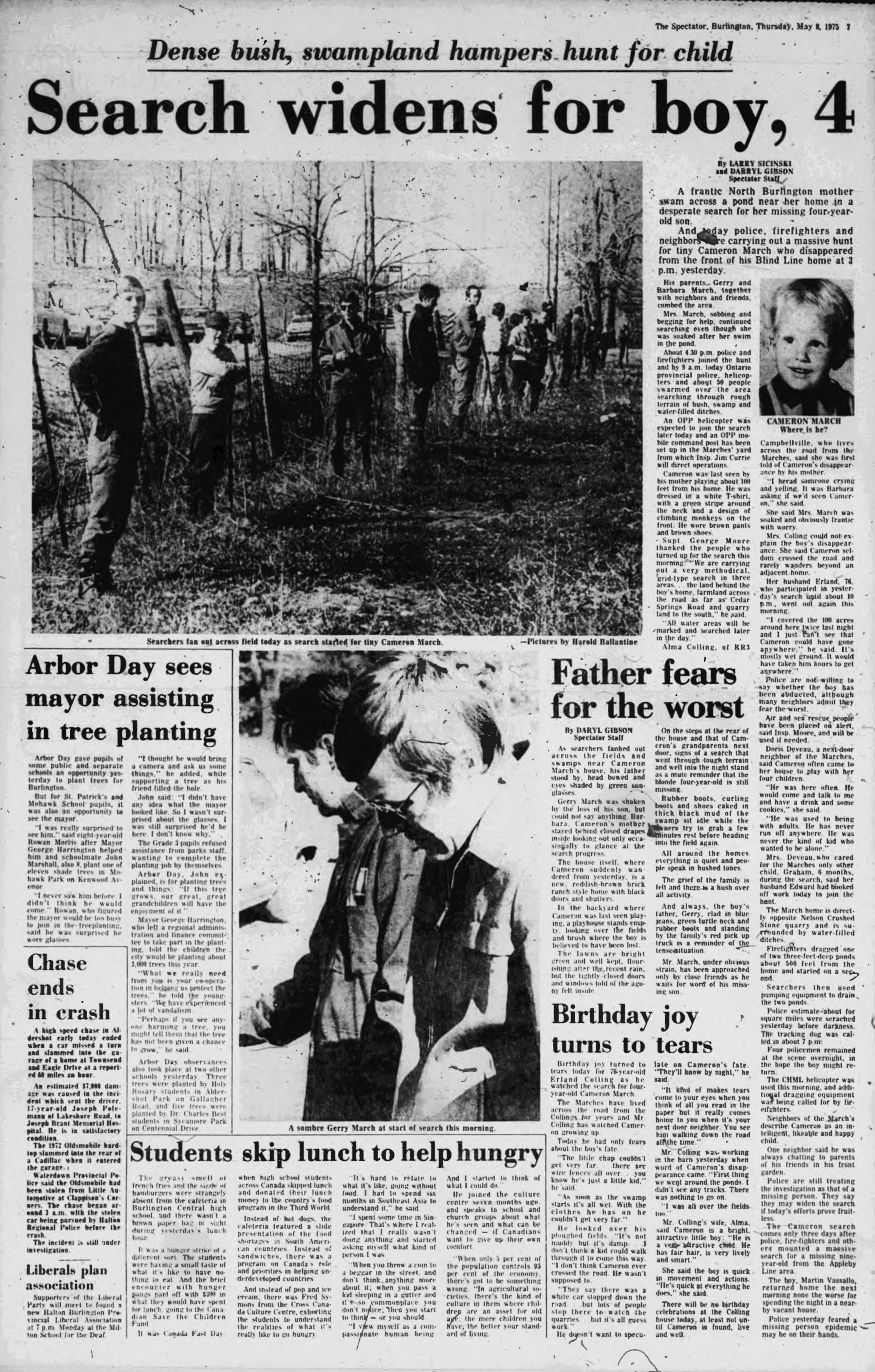 © The Hamilton Spectator. Used with permission.

If Cameron had wandered away, he could have just been exploring or perhaps following an animal or group of older children. Young children don’t realize that a return trip is needed and may start to panic when trying to get back, getting even more lost.

Moore was taking no chances and asked the community who were within a radius of up to 20 miles away to look for any clues that may provide details on Cameron’s whereabouts. Who knows how far Cameron could have wandered on that beautiful spring afternoon? Could he have ventured as far as the quarry? Could he have fallen into a water-filled ditch that surrounded the area? There was a lot of rough terrain surrounding the March family home and this made the search even more challenging.

Police searches were very different during this time when compared to procedures today.  When Cameron disappeared, different police departments and jurisdictions would not have shared information with each other. Even if there were similarities between missing children or murders in other towns, no-one would have been in a position to notice a connection.

For example, Marianne Schuett was a 10-year-old girl who also disappeared without a trace as she was coming home from school in North Burlington on April 27th 1967.

This has now changed with police sharing information across a common national database. The first few hours are crucial when a child goes missing. Ambar alerts are now raised to help find missing children faster as the information is distributed via social media such as Facebook, Twitter, and messages are sent out via emails, text messages and even digital billboards on highways. The public has now become an extension of the police eyes. Years ago, there was no such thing.

The map above illustrates expected behaviour for a four-year-old travelling on relatively even terrain - it shows how likely it is that a child of Cameron's age would be likely to be found at distances from the IPP (initial planning point).  For example, the probability is 75% that a lost child would be found within the area outlined by the green circle.  It is a visualization of the model provided by Missing Person Behaviour - An Aid to the Search Manager which combines data from William Syrotuck's 1976 study of 229 cases from New York and Washington and Ken Hill's 1994 study of 203 cases from Nova Scotia.

Parents would often have wait for a certain period of time before they could file a police report. Some jurisdictions made parents wait up to 72 hours before police would start a search. This has now changed where the police will immediately start looking for missing children.

When Cameron disappeared, at least the police started looking immediately for him probably due to his very young age. The family was kept informed of all developments as the search continued and expanded throughout the area. At least thirty police officers and detectives were working on the case full time.

The police started a grid-type search to find Cameron; usually a last resort given the enormous amount of manpower involved but no one was holding back this time. Long lines of people marched across the countryside of Halton region like soldiers on patrol.  OPP helicopters roared past scanning the surrounding area for any sign. Dogs barked as they searched bushes and hedgerows. No stone was left unturned.

Arrangements had been made for buses to transport more and more people to the rural area just north of Burlington. Thousands of police and volunteers were involved. Many of the women in the area made sandwiches, cakes and hot and cold drinks over the initial days to sustain the police and volunteers searching for little Cameron.

Four days after the boy’s disappearance, there were over 500 volunteers searching tirelessly from morning to night. The police expanded and coordinated the search area by blocks. They extended it to the Lowville area and the Nelson Crushed Stone quarry was searched again. Ponds in the area were dragged and explored by police divers, many were even drained completely. By the end of the operation over 10,000 acres of land were searched with no trace or clue. Cameron was nowhere to be found.

The March family turned to the media for help. Gerry spoke to the Spectator on the 8th May 1975 and told them that his son was a strong little boy. “He will certainly be tired and muddy if he is out there, but he was always an active little fellow. Always on the move and I certainly hope he is OK.”

He described how Cammie’s slightly discoloured upper front tooth and gold caps would shine every time he smiled. The family hadn’t given up finding him.

As the search continued with no results, the more Gerry and Barbara thought the worse. Instead of just getting lost, perhaps something bad happened to their son. Gerry reached out to television and radio stations on the 11th May and made desperate pleas for the return of his son. “I’m sure by now people have seen him, his picture or something, and somebody will phone. Phone the police or anything.” he said.

He wanted the person who took him to just leave the boy somewhere populated and call someone with his location. He wouldn’t even press charges. They just wanted their little boy back.

Barbara and Gerry were so desperate they were put in touch with a clairvoyant who had reportedly sensed the boy to be still alive; although she could not pin his location.

On the 27th May 1975 the Toronto star reported that a 64-year-old dentist, Dr. Harold Mason who dabbles in the occult had said that Cameron had been killed and thrown off a cliff. He said he took two women and man to the March family home to act as mediums. They were offered some bread which had been prepared by Barbara and after taking a bite they all became violently ill. They believed Cameron was dead.

The March family were also victims of an extortion attempt. Michael Higgins, a twenty-year-old Burlington Man was sentenced to 2 years for attempted extortion when he demanded $20,000 for the safe return of their son, as reported in the Toronto Star on July 12th 1975.

The couple even pleaded with Supt. George Moore to research areas that had already been thoroughly searched by his police offices. The operation had even overlapped with some of the area’s searched where ten-year-old Marianne Schuett was believed to have been abducted from in 1967. Could these events be linked given the similar circumstances?

Around a week after Cameron’s disappearance it became clear that the widespread search was futile. By May 20th, less than two weeks after the young boy had gone missing, the operation had reduced to just a few officers from the Halton region police force who continued their search. According to news reports, Gerry and some of his friends also continued to search but to no avail.

There were no leads, no clues. No one knows what happened to little Cammie that beautiful spring afternoon. He simply disappeared.

In 1981, the March family decided to move from Burlington to Parry Sound to raise their remaining son. As Gerry explained to the Burlington Post in October 2019, “It was tough but we stuck it and we made the best of it and moved away from where we were.” The couple also had a couple of grandchildren but they never stopped to wonder about Cameron.
Sadly, Barbara passed away in early 2019 never finding out what happened to her son. To this day, Gerry still hopes and prays that one day he will find closure from the tragic events of that spring afternoon in 1975.
“You never give up. Someday we’ll know the answer. I hope,” he said to Burlington Post.